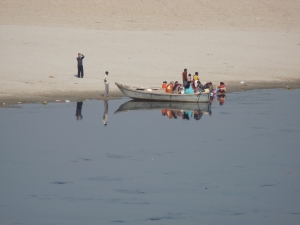 A few weeks ago, I had the awesome honor of creating a document that would guide a Q&A for former Secretary Madeleine K. Albright.  I mean, what kind of task was that, really? …Considering my feeble little mind couldn’t possibly throw her off with some new trick question she hadn’t already been asked in her… uhh… oh, I don’t know… three decades of being awesomely famous, clearly I was writing more for my own satisfaction rather than for her preparation. But, one question struck me as particularly simple and brilliant, if I may say so myself. And, I do. (I do. I doo oohhh.)

In some sick twist of fate, I ended up traveling when she actually spoke, so I didn’t get the satisfaction of hearing her answer my really good question.  So, I was left with a mean question hangover that kept me up at night.  I think this kind of persistent pondering, my friends, can only be soothed by answering my favorite question myself.  Here goes.

“Is there a place in the world that you have not yet visited that you would like to?  If so, where and why?” (Yes, I know I ended that question with a preposition – don’t judge me.)

Since, I’m not famous and I haven’t been traveling that long – comparatively speaking – I have a laundry list:

Now that I’ve spilled my guts, I’m wondering…what about you?