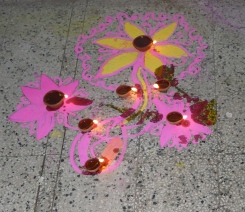 Here in Delhi, taxi drivers are academics; economists, cartographers and historians, to be exact. They are the ones who tell you where a neighborhood is, how it has evolved, and the economic reasons why its demographic is the way it is today. Once a taxi driver told me that Maidan Garhi, like most of New Delhi, used to be public forest land. As neighboring areas expanded little by little, the forested areas of Maidan Garhi started to become encroached upon by a swell of residents, makeshift homesteads, and improvised markets. It wasn’t popular or posh, just a place for the working poor to eek out a living and catch a few winks of zzzs.  At this time, of course, Maidan Garhi wasn’t yet named that. Maybe it was Saidulajaib or Mehrauli or Chattarpur or Sainak Farms or some other appropriate name for an untouched forest. Yet, in the early 1990s, the government decided that the parcel that remained uninhabited should be converted into India’s first-ever nationwide, distance-learning higher educational institution. Like any government sponsored institution, I’m sure there wasn’t much thought to how those early Maidan Garhi residents would be changed by their new neighborhood and how the new and the old communities would become one.

The relationship is still visibly bifurcated and cacophonic. Driving through the crowded streets leading to the campus is one of my favorite things to do. The area is so alive. Every time I go, I see something new. There are ashrams and yoga studios, at least six vegetable sellers that appear to get along peaceably, a women’s-only gym, a Catholic church and senior secondary school, a flower shop – a proper one – with a door, mattress makers, carpet cleaners, and university booksellers – all one after another in a single file line leading all the way to the main gates of the campus. Once through the university gates, however, the space is transformed into a quiet, secluded, suburban sprawl. There are academic buildings on small hillocks and residential apartments full of professorial families. Lacking is any sense of urgency, hustle or clutter. Call it a prime example of the abruptness of Delhi’s yen and yang.

Nandini and her son, Sonu, really embraced me from the time I joined IGNOU. She was sympathetic to my cause of being an international student at a university whose administration was clearly not preoccupied with educating or assisting foreigners. She befriended me and helped me navigate the run around. As the PGDFCS Director and Curricula founder, she explained the course’s academic expectations and she also explained the university culture. Over time, she took a real interest in my academic development, as well as my overall well-being. She and Sonu Bhai have become a repeated fixture in my date book and, now that I’m leaving Delhi, there’s something very bittersweet about driving the unplanned streets of Maidan Garhi to say my final goodbyes.

This Diwali should be my last in Delhi. Nandini and Sonu were not going to let me slip through their fingers. Instead of leaving me alone on the couch, with the dog, watching Basketball Wives while eating Cool Whip and sprinkles all night, they demanded that I spend Diwali with them. It was a small affair – nothing overdone. There was no pomp or circumstance – a real academician’s holiday celebration. It was humble and concise. We shared a beautiful rangoli, a simple and ornate Laxmi and Ganesha pooja, a boat load of freshly made puri subzi, cold ladoos, four bags of firecrackers sprayed in what’s left of the uninhabited forest (affectionately known as the backyard), and warm wishes for light and love forever more.

I, personally, have never been a fan of how Diwali is celebrated in Delhi. It’s loud and smoky, and most people are highly intoxicated. It often feels, from the outside, that its manifestation is the exact opposite of the holiday’s intention. But this year’s Diwali was both a beginning and an ending. It marked a Gladwellian (you like that don’t you?) ‘Tipping Point’ for me. Coming to peace with my Delhi experience has coincided with both the festive season and my timely farewell. Saying goodbye to Nandini and Sonu is not just about leaving behind two people I truly love, but it’s about no longer driving through my suburban, sprawling campus nestled in my favorite unplanned, urban village. It’s about just being at the point where I can direct any taxi driver directly to Nandini’s doorstep and, yet, I will no longer be able to put that information to any use.

Like the birth of this Maidan Garhi community, my time in Delhi has been unplanned and improvised. It had its rambunctiously un-ignorable memories of color and candor, sheer laughter, and good company. It has also been ugly, admittedly messy, and unapologetically disorderly. Yet, in some ways, my time here has been so goal-oriented and laser-focused that success was unavoidable. I, like my academic ‘hood, am an uncomfortable contradiction.  Somewhere in that friction, though, I’ve been able to accomplish a lot – including building strong friendships that I hope will last a lifetime. For that, I am thankful that Diwali served as a time to stop and smell the roses, count my blessings, and blow off some (firecracker) steam.

Come along for my last drive to Nandini and Sonu’s house.

May you also see light peaking through my unpredictable Maidan Garhi, my suburban IGNOU, and my love for Nandini ji and Sonu Bhai.

Too Young to Play