When I met Hyze, I didn’t know he had other names. We met at a NJ speakeasy bookstore that is no more and he volunteered to help me with my self-published urban culture magazine, Exist. We spent many hours, days and months talking through photos, stories, and basically… chilling. Trying to understand how to tell the story of where we’re from and what we live each day, though our stories, even, were vastly different. In any case, through the years Hyze revealed himself as Akintola Hanif. He and his work evolved. My magazine died. His photography grew. And his career became a combination of photo-activism, photo-journalism, and shooting the subaltern.

Months go by and he and I call, write, say we’re going to link up when I’m in town, sometimes it happens, sometimes it doesn’t. But, when it happens, my friend fills my soul. He reminds me of every artsy urban dream I ever had that I laid aside for a pay check and travel options. He reminds me that every bit of creative spirit in writing and image that I’ve produced over the years is honest to my core, because since before I was the me many people know today I was living that truth and he supported me (why, I’ll never know) from our day 1.

And so, it is with a heavy heart that I heard that he recently had a stroke. Ok, let’s be honest. I felt shock and guilt, even before I felt sympathy or concern. First, this dude is young and so shock set in before anything else. I considered that something had to have gone wrong here and that a stroke really is something that could have, should have hit a decade or two after today, maybe. Guilt came because I saw the “GoFundMe” page on his facebook account, but misread it for weeks. I thought he was starting a fund to help a friend. I didn’t realize his friend set up an account to help him. And you know how many hours I spend on facebook. I could have clicked the link and known sooner. He is my friend, a real one, seriously. I had emailed him weeks and days before with my usual two liner. “I miss you. That is all.” But, didn’t reach out beyond that. So, guilt… there you have it.

For the sympathy and concern, I could say I have a lot, but that too would be wrong. He is the second photographer in my life to have a stroke. Watching my grandfather transform into his post-stroke self was painful for him and difficult to watch, so I know the days ahead will be tough and will be different for my friend.  What I really had was fear. But, what I’ve seen in these past few days is that Hyze’s friends have come together – at least in social media land – to help support. That’s more than can be said for many people. And so that give me joy and hope. I hope it does the same for him, as he recovers and shoots new lives from a different angle.

So, he’s been many things in this life, a dancer, a single-father, a friend, a photographer, a magazine editor and founder, a son, a mentor, a whole person (with grills and glasses) with a story to tell.  #sammiches

I hope you’ll take the time to support my friend’s recovery so that he can continue to do what he does best… every little bit helps. 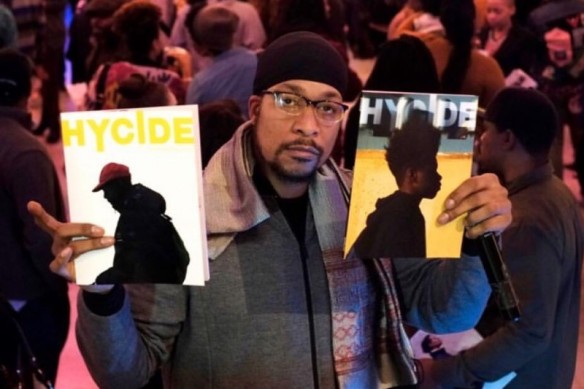