Turns out, after two years of wedded bliss and occasional blunders, a lot of my friends have now decided that I’m one half of an old married couple. I’m not sure when it happened, or why. But, I find now that my husband and I are often the most senior married couple in any room of our peers. Weird… Some of this is because here in Maputo the couples we know have been together for ages, but haven’t gone through the cumbersome feat of planning an African wedding. Most of my friends in New Jersey are singling and mingling. In short, we get asked about relationship and marital advice a lot. By no means, should we be asked. We don’t know anything about relationships, we just know a lot about each other. But, because I know we’ll get asked many times over the next year, as our friends and siblings get married one by one, here’s a short list of lessons I can share about transitioning from girlfriend to wife.

1 – Living together isn’t the same: Remember, girl friend, when it used to be exciting to sleepover at his house? The joys of the scent of his cologne on the sheets. Or better yet, before he said he’d come to your place, you cleaned up and put flowers everywhere. Oh, the staging! Staying in to cook dinner together was sweet and cozy then.When we were dating it was like sleeping over was the equivalent of staying in a nice Air BnB with benefits.  Now, wife, no matter where you go – he’s there. All the time. There’s no prep time. No down time. You’re not sharing his space and he’s not sharing yours. You’re both entitled to the same space. EEK! I died a thousand deaths at the beginning of our genuine cohabitation. I thought it’d be the same as before and it wasn’t. But the silver lining is that once it dawned on me that we’re both entitled and both responsible for the space we share, I stopped thinking I had to be the keeper of the house. His household chores have mounted! I’m his wife, not his maid.

2 – Honesty is the best policy: It’s so much harder to lie when you’re married. Remember, girl friend, when you would spend days apart and just meet up a few days a week for dates or cuddle sessions? You both had separate lives then. He was busy. You were busy. You both were broke.  You casually omit that your ex drunk dialed you, because you were in bed alone that night any way. You could say with a straight face, “I didn’t spend that much on shoes yesterday,” because you didn’t go over your household finances regularly. He could say, “I was at soccer,” and you wouldn’t have a clue if he actually went. You didn’t experience the confirmation funk after he came home from a friendly match. Now, wife, you both know too much. Even little white lies are hard to tell and personal secrets are hard to keep. We have managed to keep a pretty uncensored relationship and I don’t know how anyone could survive any other way. “I know your grandmother doesn’t like me. The feeling is pretty much mutual,” has been heard at our dining room table with multiple furrowed brows. “Quit complaining about being fat, you aren’t doing anything about it” has been said about 3 times in the last month – not that I’m counting. In any case, there’s a bit of thick skin that’s acquired, but the active listening skills improve. When you’re married you’ve got to listen to and live through the whole truth, not just the pretty parts.

3 – “You’re on the same team”: We have 2 married couple role models, both couples were families I worked with in India and whose advice has been absolutely invaluable. (#couplegoals that are attainable and proximate are important for us.) This nugget came from the husband of one of these patron saints. And he said it to me, not us. At a farewell dinner, he said (with caution), “you have to remember that no matter what, you’re on the same team. I know you, and you’ll need to remember this.” And he was right. Not just right, but really right. Remember that honesty thing I said before, well that’s hard to stomach. It’s so much easier said than done. When somebody tells you things you don’t want to hear or when their support doesn’t look the way you planned, it can definitely feel isolating and oppositional. I’ve learned over the last few years that being on the same team doesn’t always mean being in agreement or even in sync. Sometimes it means being complimentary, using each other as force multipliers. What a relief it is to learn that marriage is like running a relay race together rather than competing side by side at a marathon. 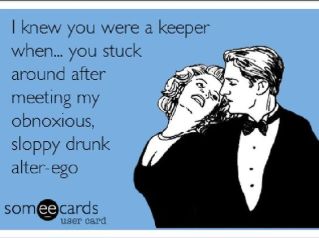 4 – Be prepared to act a fool together: We struggled at the beginning to have fun together. My husband’s idea of fun sometimes goes too far and I feel like I have to be sober to make sure he doesn’t throw up in the pool. My idea of fun is best described as “0 to 100 real quick.” Either I’m absolutely boring (seriously, listening to productivity podcasts and watching paint dry boring) while recharging my introvert battery OR I’m double fisting at any bar that will let me in without a cover (after you do this enough, the bar access eases). What this means is, we have seen each other at our worst – in the pursuit of trying to let off steam and let our hair down. Work hard, play hard has landed us next to each other the next day often with one of us having absolutely no recollection of the 15 hour period before. Girl friend, you might feel the need to discuss this in depth. Ask and be asked about your motivations. You think this behavior is an indication of a problem. This wife does a thorough physical check that no one has shed blood over the night before, confirms that no one has incriminating photos in their phones, says a prayer to the patron saint that keeps all fools safe, and makes a hearty breakfast to sop up the alcohol belly and shame accumulated over the night before. And then, we laugh about it and move on. Remember when I said you’ll have to “listen to and live through the whole truth, not just the pretty parts,” embarrassing yourself in front of your partner is just part and parcel.

5- There are things I still don’t understand: This list is an abbreviated version of the long list of things I still don’t get about my own relationship, much less anyone else’s, i.e. farting around each other, managing finances, when/whether to have kids, intimacy, making the bed in the morning (hint: i don’t give AF about making anybody’s bed), attendance at family functions, working together, cross cultural union, inter religious union,  bilingual union, deciding where is home, retirement plans (yes, i’m thinking about it already), exes as friends, platonic friends, definitions of fun, managing a social calendar, managing my introversion, managing his extroversion… I could go on, but can you see why we’re so uncomfortable being the old wise couple in the room? We don’t know anything except our own experiences, most of which we haven’t even worked out yet.

My guess is 10, 15, 25 years down the line, the same will continue to be true. We still won’t know much, but we’ll have a lot of experience with trying to figure it out.