Welcome to the 6th installation of #musicamondays & #MUSICMONDAYS, which features music from around the world. Each song is selected to start your week off with a new energy and new country(ies) to explore! You’re welcome 😉 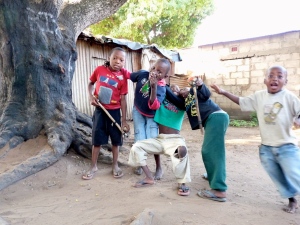 Perhaps what Harlem is to New York City or, say, Rocinha is to Rio de Janeiro, Mafalala is to Maputo. The neighborhood predates the colonial era, but was defined by its colonial era evolution. In separating the natives (read: Africans) from the Europeans (read: Portuguese), the town of Lourenco Marques – common day Maputo – had a variety of Jim Crow or apartheid-like racial boundaries. One being that the Africans were not allowed in the center city – near the train station and seaport – without proof of employment in those areas. It goes without saying that Africans most certainly were not allowed to live in that area, but they needed to be close enough to work in these hubs. Bordering neighborhoods like Mafalala were just a stone’s throw from the Portuguese part of town, but a world apart.

While these barriers kept Africans out of the city center, it didn’t do much to keep Whites out of the ‘hood. So, Mafalala (like Chamanculo and other surrounding areas) became home to many mulattos – people of mixed race who often had access to educational and financial resources from their White parentage. Many were conceived in Mafalala between White fathers and African mothers (often ‘working girls’) after nights in the underground marrabenta bars. Mafalala bears its very name from the Portuguese mispronunciation of an indigenous word for a kind of folk dance, properly pronounced Um-faah-la-la.

Where conflict and cultures converge something new will always emerge. Such is the case in Mafalala. Word has it that as the city’s demand for English and French speaking workers increased, the Portuguese decided to expand their workforce by importing Africans from neighboring Comoros and Zanzibar. With them, these people brought a strong connection to Islam, which is still visible today, and the Arabic (and its Kiswahili derivative) language. It is said that over 60 percent of the neighborhood’s residents identify as Muslim and Mafalala is home to countless mosques and masjids. Imagine the trickery needed to hide a mosque from the eyes of the intolerant and bigoted colonial masters. Simply surviving was a defiant act of resistance.

In addition to the foreign residents, Mafalala is home to many internal migrants. Macua speakers from the north and Ronga speakers from the south find themselves next door neighbors in this enclave – and apparently it’s been that way for generations. Whether it be the draw of jobs in the city center, refuge from anti-colonial fighting in the interior, safety from starvation and poverty during the civil war, Mafalala has been home to many passersby with a diversity of reasons for coming. Even, poet Noemi de Sousa and ex-Presidents Samora Machel and Joaquim Chissano rested their heads there for a time.

Today, this part of town is part of legend and lure.  It is still home to many working poor and tough guys. Like in Rocinha and (what remains of) Harlem, many of it’s residents are still fighting to overcome historic external barriers, as well as just beginning to break some of the negative, self-induced behaviors that have held them back. Like any modern community, Mafalala is made up of lots of sub-communities and ethnic groups, the boundaries of which have always been in flux. Whether they arrived in the 15th century or just yesterday, the people of Mafalala help color a part of the city that deserves more kudos for its cultural contributions and recognition for it’s sheer existence after eras of extreme change.

Without further ado, the many faces and facets of Mafalala:

To learn more about the Mafalala Walking Tour and the Association of young people who run it, check out http://www.iverca.org