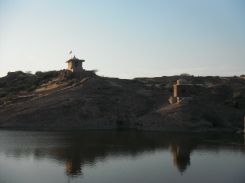 When I was in Jodhpur last month, I ended up staying in a resort hotel that just so happened to have a last-minute room available.  I tried to book at the Taj and the Oberoi, and I even tried a local Haveli.  But they were booked up and my flights were already paid for, so I had to scrounge up something and fast! So with little more than the promise of a clean bed and a good ranking on http://www.tripadvisor.com, I reserved a 3 night stay in the Water Habitat Retreat. And whoa, what a treat! This got me thinking about some of my most pleasant, surprise room stays around the world. When you travel, your room is your castle. Here are just four unsung heroes I recommend with confidence:

As the NGO expansion of a Maharaja’s summer home, the Water Habitat Retreat is a 28 room boutique hotel that offers vistas from Jodhpur’s Marwar desert.  Just about 20 minutes from the city center, this hotel is truly an oasis of stunning man-made lakes, hill-top temples, and quiet serenity. The rooms do not have TVs, but I was given a USB MBlaze to get internet reception free of charge.  What’s the catch? Well, the hotel is built aside a water catchment plant and reservoir.  The Aravalli hills are known for desert and drought, but in this NGO run hotel 70% of the hotel booking costs go directly to water harvesting. So, this nice hideaway also doubles as an opportunity for philanthropy. Hard to top that.

When a friend came to India shortly after I first arrived, we scrambled to find a hotel in Goa. We combed http://www.tripadvisor.com for a reasonably priced guesthouse near Candolim or Sinquerim beach. We tried to book to the #1 ranked Bougainvillea Goa, but they were full. They offered a room in their sister guest house just a 3 minute walk away. For $30 USD a night, we booked at Victoria Village Guest House. The room was clean and the owners were very sweet. The wife came to the door carrying her pudgy cheeked doll of a daughter and the husband told us about his sister’s restaurant down the road – which was not a tourist trap! Just a five-minute walk away from the Fort Aguada Taj hotel, I can’t imagine why anyone would choose NOT to stay at Victoria Village.

Not all surprises are cheap. And in San Francisco, you can bet that any good surprise costs a premium. But, a few years back I booked 3 nights at the Orchard Hotel and never once regretted it. I especially appreciated it when I got so sick that I couldn’t leave the hotel on the night before I was set to depart. I still remember the fish stew I ordered from room service, and I have yet to try fish stew that competes. The cleaning crew came multiple times a day and only when they knew we were out of the hotel – so no annoying knocks in the morning. Well worth the spend, if I’m ever back in San Fran I’ll be trying to relive my fish stew dream.

One of my very favorite places in all of the U.S. is Germany Valley, West Virginia. Trying to unplug from Washington, D.C. life, I searched for a fall foliage locale that wouldn’t break the bank. While once on a stay in the Appalachian-Cabins in Seneca Rocks, I drove a ways and discovered the Germany Valley cabins. I decided that the next year, I would have to come back and stay in one. I had to book almost a year in advance to ensure I had an October weekend, but it was well worth it. Some of my fondest memories with my best friends and their kids were had right there in those hills. These cabins are a hidden gem, well worth the 5 hour drive from DC.

Here are a few other lodging options worth checking out:

Well the time has come to leave India; all I can say is, “Oh, Delhi you slay me.” I’m not sure what it is about India, but it is surely a special place. While I racked my brain about what to write it was clear that I wouldn’t be able to fully explain my feelings on all the events of this “vacation.” It is often said that the journey is equally important as the destination. So, lets begin with the journey from Indira Gandhi International airport. We were pulled over in our taxi by a motorcycle cop with no siren and no tickets, and eventually let go without any penalty. All the while I’m thinking, “this is a pure waste of time.” Apparently this is the case with many things here. So before I continue here’s my disclaimer: I cannot be held responsible for any confusion as a result of the lack of order in this publication. It is an accurate reflection of this trip.

Indian culture is the product of several religions, languages, and power shifts over centuries. And there’s finally English colonization. As a historian, I would love to say this explains the huge socio-economic gap that exists here, but I truly don’t know. The poverty I’ve seen here exponentially outshines the best “Feed the Children” infomercial. There are literally people who sleep on the ground feet away from Lamborghinis and Bentleys.  I assume this is why everything here has a price. Free parking is under the control of self-proclaimed ‘attendants,’ who will flatten your tires if you don’t pay 10 rupees (2 cents). At every historical sight there was some guy wanting his cut. The City Palace in Jaipur boasts a bathroom guy, parking fellow, and even a perfect spot for picture men who double as guides. My sister says that’s why it takes so long to get things done, because there are so many people who need a piece of the action. I’m not sure what it is, but when every job is done with primitive technology what can you expect? Five guys painted lines on the street, which are clearly just a suggestion to the worst drivers in the world (congratulations New Yorkers). Not everything about India and Delhi is bad, but it just takes a bit of patience to see past it.

While here I had the pleasure of dining with a diplomat and his wife in a home that had more servants than I have immediate family members. Any who at this dinner it was clear that Delhi was like an onion and I would only understand it if I peeled back the layers. Similar to eating the street food here, I would have to be a native or extremely bold to try it. Let’s assume I was the latter.

So with my backpack, father and horn happy driver I hit the streets. Vasant Vihar (my area of residence) was littered with small embassies. Most only having one guard in a small booth, which surprised me. In a walk through old Delhi there were tombs that remained from the beginning of Delhi’s existence. It came as a shock that these beautiful structures were only accessible by walking through a maze of side streets and tight back alleys that played host to butchers, barbershops, bakeries, and even a goat with a coat (see above). There were no short cuts taken in the rewiring of streetlights to provide energy to this prehistoric part of town either. Survival is contingent upon family unity. While family does not always constitute shared blood, the love is no different.

So I leave India with my sense of family bonds renewed and my appreciation for the simple things exponentially multiplied. I’ve seen enough palaces and forts to last a lifetime with pictures to prove it. I’ve seen the world’s biggest clock and the world’s biggest silver jar (seriously). My nights have consisted of movies and television shows about old English people with my dear sister and father. My days were filled with walks around Vasant Vihar taking pictures of all the Embassies I could find. I’ve seen a woman balancing 5 pots on her head and dancing to the music of her seemingly mentally ill sons. My vacation has shown me crazy men who beg for money exist all around the globe. With all that said I wouldn’t move India to the top of my vacation list, but I am grateful for the new friends made and time well spent.

△ empowering people with the ideas, tools and resources they need to thrive △