Photo by Michał Parzuchowski on Unsplash

I look back on this year, and it’s hard to take stock of everything that’s happened. I moved my family from Angola to South Africa, worked with an amazing local team there, was mentored by peers and superiors worth their weight in gold, had a healthy natural birth, graduated with a doctorate degree, published a slew of articles, elevated my business, and fell in love with my family. On the other side of the coin, I have struggled with a toxic workplace and being on the receiving end of discrimination, individual and institutional. My body and my mind are still adjusting to being a mom of 2 very young kids. My spirit is learning what it really means to overcome and re-define priorities. To say this year has been a rollercoaster would be a gross oversimplification, but I’ve been tasked with figuring out why – on earth – it has been this hard. And I’ve come up with a few thoughts…

Being a working mother is hard. No matter how progressive your partner, being a working mother is exceptionally hard. I had no maternity leave, so I cobbled together vacation and sick leave for about 8 weeks to deal with birth, a breast abscess, and now chronic tailbone pain. I never recovered from birth. I have never been able to fully connect with my child, without the threat of work – its admin, financial and substantive demands – looming just hours or footsteps away. I underestimated how much my superiors would push me to overwork and be over-responsive, to “make up” for the time I wasn’t in their office OR to insinuate that I need to re-prove my ability to lead. It’s been punishingly unfair, but so many people – working moms included – feel the need to pass on the hazing they received. Mistreating and being mistreated this way is normalized and worn like a badge of honor. I work in a historically male-dominated field that waxes poetic about being female and family-friendly, but they really imagine families headed by men. I found that out after I had kids… 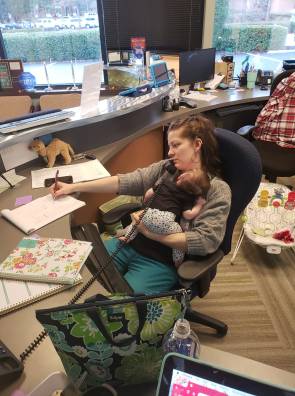 All change (even good change) is stressful. While ever my constant companion, change is starting to get on my nerves.With new dependents, routine makes life manageable. Change comes in and craps on the plans. All the plans. Every plan. It is hard to have so many variables in your life. Even when things change for “the better,” there are a gang of unknowns that can drive you mad. When we moved to South Africa, for example, we lived in an extended stay hotel. Lovely, you might say. It was a huge adjustment to have to live out of suitcases for months, when we had a perfectly set up home in Angola. The adjusting to having Uber and room service, functional internet and potable tap water – well that wasn’t so bad. But having to change childcare providers 4 times in 4 months, less so. On balance, constant change was no easy thing.

I expect a lot from myself. Much has been written about Black women’s strength and our work ethic, our tendency to outpace our peers in educational attainment but to be perpetually underpaid and underpromoted. While I can certainly think of a few who genuinely don’t deserve to move up, generally I think the tropes are true. I, for one, expect a lot of myself. Nothing I do is mediocre if my name is on it. No amount of bait & switches can change that. I’m not exactly a perfectionist, but I have high standards. And that – I’m realizing – is both something that I need to adjust (given my new priorities) and that others don’t share. I will always be my worst critic, my biggest competition, my own coach. I’m learning to have more empathy for myself, rather than pressuring myself to persevere through adversity.  Working hard, despite obstacles, is not the only option. Some adversity is just abuse, and you don’t go through it – you go around it or rise above it. 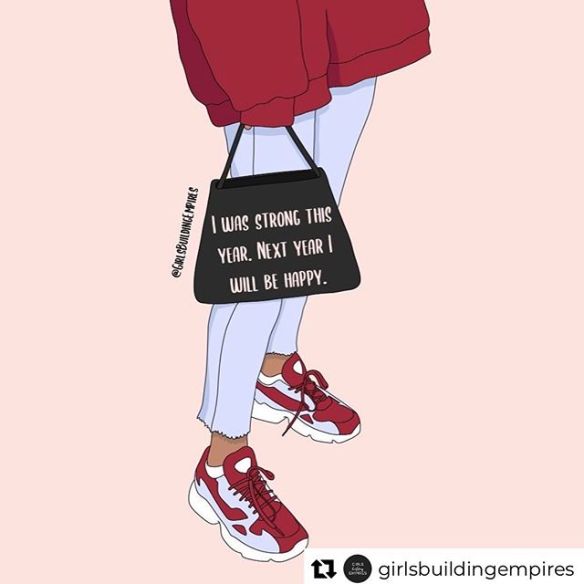 2020 will, no doubt, be equally as full of adventure and new challenges, but 2019 takes the cake for its frenetic pace, its defining moments, and life-changing lessons. It has been professionally hard, but personally rewarding. I am learning that when you know what really matters, you also know what doesn’t matter at all. And in 2020, I hope to be less reticent to commit restorative energy to everything and everyone that truly matter. I feel strongly that this year was a break out year, the one where I put my stake in the ground and was required to become the woman I want to be for the rest of my life. Next year, I can’t wait to introduce her to you all. 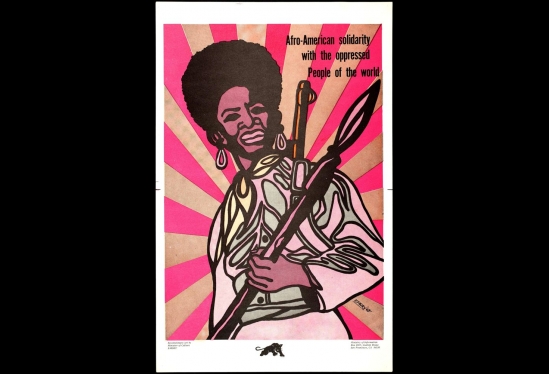 I was a late comer to Wakanda. When I did arrive, my Pan-African senses were pleased with the drips of South African house music and the incorporation of every beautiful textile the continent possesses. I was relieved that there was no tinge of jealous “authenticity” politics afoot. And off-screen, Black people everywhere rejoiced in 2 hours and 15 minutes free of racist micro-aggressions. What a sacred space at a troubled time.

And, further still, what exactly was being said about African-Americans? (Not that part at the end where we are basically rescued from the ghettos by our enlightened African brothers and sisters – that I don’t necessarily agree with, but I can live with it.) What I mean is, why are we always portrayed as Erik Killmonger? Self-centered, egomaniacal, bloodthirsty, violent, self-destructive, vengeful… shall I go on?

Now, I am no stranger to seeing Michael B. Jordan play characters of questionable character, but Erik Killmonger was too much. He was well-trained, but quick tempered. He used the tools in Uncle Tom’s Cabin to build his own coffin. Painted as a righteous mutineer gone power crazy, Killmonger is simultaneously the colonized and the colonizer’s worst enemy. He was the walking stereotype of the angry African-American man – maybe justified in the beginning, but notoriously drunk with power and toxic wherever he goes.

This movie, for me, reinforced negative stereotypes of African-Americans to present mythical African glory. This zero sum game is just another example of a colonized mind and the continuation of White hegemony, even in supposedly sacred and autonomously crafted Black spaces. Like braid extensions at the natural hair expo, I feel that this film still misses the mark. It gives credence to superficial narratives and it omits crucial voices.

Did anyone ever think that taking Erik from California to Wakanda was not an option, because – oh, I don’t know – he had a mother!? And from the Black excellence he exuded in the military, my best guess is that she was African-American as F. Taking her son wasn’t an option for more important reasons than Wakandan shame. That same love and pride that Angela Bassett (depicting an African mother) showered on T’challa, that’s African-American women all day. And somehow, that cultivator, that influencer, that decision-maker, that elder, was absent. Better yet, omitted. Why, for, come?

Like so many narratives about the conversation between Africans and African-Americans, Black Panther regurgitates tropes and past transgressions dominate the dialogue. We should be talking about partnership among troubled equals. This exchange could have been different on screen and should be different in real life. That passionate longing for belonging in African-Americans is somehow always framed as futile. Like asking for reparations, we are paternalistically discouraged from looking back and preemptively halted for fear that we will get (rightfully) unbridled or bloodthirsty – like Killmonger. Yet, like movements for actual reparations (Georgetown slavery Archive), African-Americans are owed the opportunity to make peace with their pasts. And, rest assured, we know how to do it without destroying our futures.

To watch this movie and not see a commentary on how African-Americans are our own worst enemy is to be deaf, dumb, and blind. Those who don’t see it my way, haven’t been to Africa and haven’t known this conversation as intimately as I have. This movie is nowhere near accurate.  When I first went to Ghana in 2006, I remember discussions with Kofi Awoonor about the Transatlantic slave trade. There were side eyes at the White girls in the group, whose White guilt was so thick you could cut it with a knife. There were layers of Blackness confronted when a light skinned Black woman was called mulungo (White, foreigner) and wasn’t embraced on her expected “return to the motherland.” It brought up her own uncomfortable memories of being ostracized for being bi-racial. Needless to say, everybody was working through their own positionality. Above all else, what gripped me from the many conversations between Blacks and Africans during that trip is a comment from one of the junior academicians at the University of Ghana. He said, “We lost you – our most powerful resource. Do you know what it is to lose your strongest, your most-able bodied, your youth? Look how we suffer because we sent you away.”

This is the real conversation. It acknowledges agency and objectification. It recognizes history as a continuum and not a series of ruptures. It talks about socio-economic consequences for labor migration. It speaks to cultural interconnectivity, not in terms of fictional theory, but in realities of development. This conversation is about restorative justice… not revenge.

This movie sucks the air out of the room because it falls so far afoul of this useful conversation. I hope moviegoers remember that we do not have to do our (neo-) colonizers’ bidding by having Hollywood ticket sales rebuild our burned bridges. No matter how many beads and handshakes we have on screen, the story is built on old tropes that don’t serve us in real life. Black Panther excludes the lynchpin connecting Africa to America – the African-American women, mothers, and aunties – the guardians of our cultural continuities. If Wakandan value doesn’t come in the form of inclusion of all Blackness, let’s hope it has cleared the way for conversations like these that call out the exclusions.  As a mother, an African-American woman, and a member of the Pan-African diaspora, I have to believe that this movie is not us. It is not us any more than X-men is us, no more than Batman is us. We do not live in Wakanda any more than we reside in Gotham City. Killmonger is not my son and I am not absent.