When people talk about Mozambique, they often say positive things like “The people are really friendly,” and “The seafood is really great.” Both are true, but they only take you so far. When you stick around for longer than a holiday weekend, reality starts to set in and this ole’ girl called Maputo starts to show her crow’s feet. She’s not an impressive city in comparison to neighboring Joburg, but she has charm and class. And the people are friendly, but with a healthy dose of sass and wit. Let’s just say that there are a lot of things I had to discover on my own. Here are the top 5 things that nobody ever told me about Maputo:

5- The seafood is good, but it gets boring. Most Mozambican meals boast 4 main ingredients: oil, onion, tomato and salt. Put it on meat. Put it on fish. Marinate it all day. It’s going to taste like a slight variation on the same thing every time. And most of the vegetable sides are potato, chima, and/or salad with white lettuce. I love the flavors (even when they are doused in MSG powder), but after having such culinary variety in the U.S. and India my tongue is bored.

4- Mozambican women are BAD! So…I’m not sure if I’m allowed to say this and not get my “heterosexual card” pulled, but really these women are effortlessly pretty. They are all well proportioned. Most work out actively. They have kids and still look good in bathing suits. They actually have lovely skin and awesome cheekbones. And, well, it’s all-natural (ish). People don’t believe in the botox or the injections, though they do have an affinity for new weaves/wigs every weekend. But what’s a little fake hair when your butt is real? Fair trade.

3- Nobody actually gets in the water. The drive along the Marginal every day really reminds why the hell I put myself through the torture of 9 hour workdays. But, nobody tells you that you can’t actually get in the water. It’s just decoration. It contains lots of gross matter that no one should have on their bodies, because it only recently came out of someone else’s body. The Indian Ocean looks so tempting you just might be tricked into wanting to dip a toe in on a romantic stroll on a hot summer’s day, but that would be a fool’s errand. Look, but don’t touch!

2-Maputo is everywhere you want to be. The city is only a three-hour drive to Swaziland and South Africa. Sure the roads are kinda unmarked and poorly lit, but those are no match for people with an adventurous spirit in need of widely spoken English interaction and South African supermarket products. I always thought it was the scarcity of consumer goods that drove people over the border, but it’s more than that. The grass isn’t always greener, but it’s definitely more orderly. And South African magazines like Bona and True Love are my new favorite addiction. 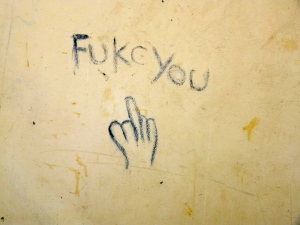 1-Mozambicans are the biggest haters on earth. This is a real photo, from a real wall, on a real street in Maputo. No lie! I have never in my life met people who celebrate with suspicion, instinctively. Tell someone that you graduated from college or that you got a new job! It is not met with unfettered happiness and congratulations. It is met with a slow and deliberate questioning of just how you did it. Somebody must have helped you. You could have paid somebody a bribe. The very last thing that will come to people’s minds is that they should be happy for and with you. Actually, it’s as if most people don’t even think ‘positivity’ is an acceptable reaction. I chalk it up to the country’s socialist history, where having more than the next person made you the brunt of suspicion, not the example of accomplishment. The sentiment lingers on well into the present and today I wouldn’t call it socialism. I just call it hate.

Well, you’ll have to come and see for yourself all the good and bad things Maputo has in store, including the exclusive beaches and resorts throughout the rest of the country. There you can get in the water and the women are still drop dead gorgeous. It hasn’t been determined if the hater quotient is still a national phenomenon or a localized epidemic. Be suspicious ya’ll, be very suspicious.

2 thoughts on “5 things people never told me about Maputo…”