And so it is, fellow American, that when you are shot down in the street or bullets are pumped into you while seated in your car or you are put in a chokehold, that is forever your legacy. You, deceased individual, are a hashtag, a cause, a martyr and hologram, because not only do you not have privacy act rights, you no longer have the right to live. Your entire life gets boiled down to one moment, beyond your control, for which you are forever a victim. Your family members’ names get published by CNN and the NYTimes. If your story is amplified by anyone except someone who loves you beyond a headline, you become a caricature – maybe good, maybe bad. But, it’s highly likely that if you’re Black, it will be bad. But, let’s not make this a race issue…

According to some sources, there are now 700 of you that got killed this year alone at the hands of police officers. But that number is still rising, so let’s not jump to conclusions.

Let’s take last year, 2015. Remember that year?  I do. It looked a lil something like this… 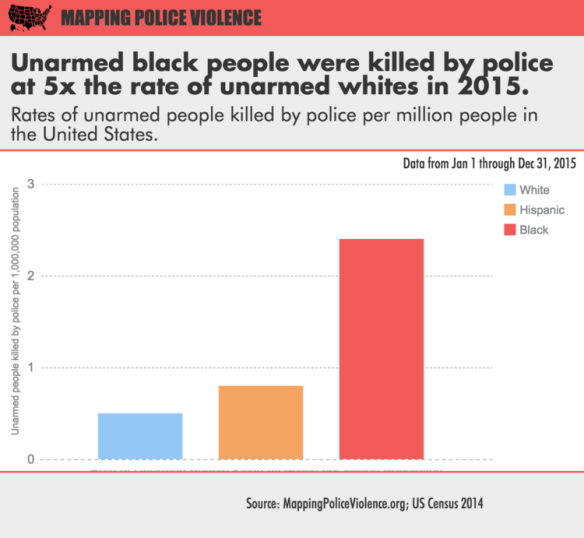 And these officers, the ones that killed you, what are their names again? I’m sorry, I think I may have missed that detail. Let me re-read the article. Let me try the BBC. Since, you know, they’re not like our U.S. outlets and they are prone to being loose lipped.  Oh dear, you have to scroll alllll the way down… I mean waayyyyy down.

Let me be clear: They, the ones shielded by a blue code of silence with gunpowder residue on their hands, get to be relatively anonymous. We are never to know the names of their children or the address of their spouse’s job? Their families don’t give tear filled press conferences at City Hall offering more context about the loved one of theirs who was involved in these acts and whose lives will never be the same? Their entire lives are not boiled down to that one hot-head moment where – oh, I don’t know – they killed a person? They get to be anonymous and start over after the dust has settled on a grave across town?

Something is very wrong here. Wronger than we thought.

This kind of questioning is not radical. It is not incendiary.
It is educated. It is exactly what a person with common sense, a thread of humanity, and a moral compass pointing in the right direction should ask.

Be careful what you call terrorism. Be careful what you call a security concern. Despite many deaths (in churches, in kindergartens, in nightclubs), it is still legal to carry a gun. The ole’ “he’s got a gun” routine is up guys. Unless it is pointed at you (you know, put yourself in the place of the now deceased and relive that ‘gun pointed at you’ imagery), you’re supposed to use that cop training to know how to stay calm under said pressure. After all, you are a professional.

Because WE, all of us – you, me, the proverbial we – were beyond this. We were polite, un-intrusive about our racism and our “hidden” biases. See, we even call them hidden, when everyone around us knows that we are bigots in our own way, narrow minded in our own right. But, alas, racism has been here all the time. Moving on up from the mean streets of urban centers, to lay in wait in institutions of higher education and just below glass ceilings in elite professions.

That, my friends, is terrorism.

But the privileged among us feign plausible deniability.

One more thing left unsaid. But, we (the people) can do better than this.

We can say their names.

One by one, every time we find out. Every time it’s discovered. When you kill someone you relinquish the right to remain unquestioned by the people who pay you to protect them. Your accountability isn’t to a police station or your colleagues on high. It is to us. Why should we defend your right to privacy, when you deny our right to life?

…Better yet, the right to feel safe in our homes, our own neighborhoods, our own country.

You owe us an explanation, in both a court of law and of public opinion.

May you be reduced to nothing more than a trending hashtag. A faceless, lifeless, soulless entity who is a caricature of all our stereotypes, unable to function in this world as you once did before that fateful day. May your professional oaths force you to face up to the public you vow(ed) to serve. May your family have to suffer with reading the gory details of your past sins plastered on blogs and news outlets so long as they shall live. May their cries in your defense be meaningless and give no redemption. May you never have a sleepless night for remembrance of a moment in time when you were in the wrong place, at the wrong time, with the wrong person, on the wrong side of a powerful pointer finger.

May you never rest in peace.

And the names go on…

Lest we fail to exercise our right to free speech, while we still breathe free air.