I am not what you might call a “movie person.” The thought of a theatre experience reminds me of paying goo gobs of cash to sit in a cushy seat probably infested with bodily fluids from strangers. Needless to say, I’m not often moved by the images on the big screen, unless there are a lot of things blowing up. Yet Netflix has been my homeboy for some years now, shipping cult classics and obscure foreign titles to wherever in the world I may be. In honor of the 28 year anniversary of one of my absolute faves, “She’s Gotta Have It,” here’s my top ten list of must-see movies that you probably haven’t seen (or at least not in a long time):

Gomorrah is a 2008 film from Italy, based on a Robert Saviano book. This is not your typical mafia movie. In every form and fashion, it’s better.  It weaves five individual stories of people trying to make their own connections with the Casalesi clan, a crime syndicate within the Camorra.

2.  Borders Frontieres is a 2002 film from France/ Algeria that focuses on African clandestine immigration to southern Europe. Comedic and tragic, the film charts the journey of seven people traveling from Senegal through Algeria and onward to Spain.

3. Woody Allen’s 1977 classic Annie Hall is the pre and post-mortem tale of a relationship between two seemingly incompatible people, who once fell in love. It’s romantic and whimsical, and also shows scenes of back when NYC was gritty.

4. First of all, “Dilwale Dulhania le Jeyenge” stars my absolute fave Bollywood actress, Kajol and, second, it involves a young woman traveling on her own. What’s not to love (maybe SRK’s hair cut)?

This is the story of two kids who, against their own wishes, fall in love while taking the Eurorail. Both are non-resident Indians, raised in Britain, and both are struggling to meet their parents’ expectations for adulthood. But, when they first meet, neither knows this about the other… and hence, the comedic elements of this 1995 romantic comedy.

In the 2003 drama, 21 Grams, an accident brings together three people who couldn’t be more unrelated or disconnected. The words love, faith, guilt and revenge all crop up, a lot. The movie stars Benicio del Torro, Naomi Watts and Sean Penn, and is directed by the Mexico City native Alejandro González Iñárritu.

6. Mexico’s 2008 Sleep Dealer has to be one of the most engaging sci-fi movies I’ve ever seen. (Sci-fi is not my genre of choice.) The plot is not as blatantly transparent in its allusion to specific political events as South Africa’s District 9, but it definitely made me think – how far away are we from this being a reality? The long and short of it is that technology has developed such that people’s bodies can be in one place and through the use of a physical attachment, they can use robotics to operate machinery and perform tasks that are actually located in another place. The dynamics of immigration being the same, this dynamic interestingly means that there is migrant work with no workers, but at what cost?

Leon is probably one of the most gangster movies I’ve ever watched and enjoyed. A hitman teams up with a little girl, and they start whooping ass! Natalie Portman + Jean Reno / circa 1994 = You’ll have to just watch it.

8. Alfred Hitchcock’s The Man Who Knew Too Much, made me appreciate that Hitchcock isn’t only about scare and gore. In this mid-century tale, an American family travel to Morocco, only to get caught up in a murder mystery, an assassination attempt, and a kidnapping. There’s drama and travel, mixed in with politics and music. Apparently there are two versions of the film, from 1934 and 1956, and I don’t remember which version I saw.  So, have your pick!

9. Dirty Pretty Things is based in modern-day UK, and tells the story of a clandestine African immigrant who is a trained doctor by profession and a Turkish woman whose visa to the UK allows her to stay, but not work. Both are tied by mutual interest and genuine affection, and they are only brought closer together when Senay considers harvesting an organ on the black market in order to get a fake passport to travel to the U.S.A.

The Gods Must be Crazy is to South Africa what Coming to America is to the United States. Released in 1980, it is said to be the most commercially successful film from South Africa (but maybe that’s changed since the release of District 9). The movie is set in the desert of Botswana, where Xi, a Sho of the Kalahari Desert (played by Namibian San farmer Nǃxau) lives with his tribesmen. None of them are conscious of the world outside of or different from the desert they know, until Xi stumbles upon a Coca Cola bottle.

Out of curiosity, how many of you have actually seen any of these?

Every once in a while I like to live the glamorous life. I emerge from behind the screen, out of the shadows of my EMUs, and over the bridge into D.C. proper. Often, this inclination is met with ill-fated results, but I’ve got a mean case of revolving door, selective memory.

Nevertheless, Delhi left me with lots of fine jewelry and the stamina for a demanding social life. With Delhi behind me, though, I have no good place to use these gifts. So, last week my desperation led me to search “fashion” in D.C. on eventbrite. The event I selected was D.C. Fashion Week’s International Couture Collections show and, let’s just say, it turned out to be such a hot mess that I decided to rush back home, cozy up on my couch with a tall glass of Voga Pinot Grigio, and get these fingers tickling my keyboard.

D.C. is not Delhi and I mean that in the most insulting way to the District. Delhi has its flaws, but fashion is not one of them.  Only the top hotels are venues for showings and only the top designers get to show. Apparently, in D.C. there was an open call for whoever just happened to wear clothes on a daily basis. First, the show opened with the models just walking down the runway in black clothes. They didn’t announce their names or tell us why we were subjected to a runway walk without a purpose. Were these black clothes those of any particular designer? No, sir. They appeared to be the models’ own. First problem identified. “A fashion show with no fashions!” I didn’t sign up for this! 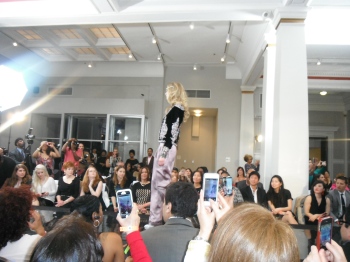 What I did sign up for was the show of the featured designer Menouba. She hails from Algeria and her clothing is an Arab-French fusion of well embroidered jackets and aladina pants. And while it’s not the very best I’ve ever seen, I was definitely impressed with the intricacy and the tailored fit of her jackets. The Menouba show was followed by a Pakistani-American designer and a lady from D.C. Sequins and polyester heavy, none of their clothes were altered to fit the models. I could go on and on, but just watching them made me feel itchy. In sum, their shows were so disappointing I didn’t bother to take photos. Second problem identified.

Before an intermission – yes, chile an intermission at a fashion show – the host decided to do interviews with the designers. (Q: Where they do that at? A: D.C., baby) So, he calls out the designer for Menouba from the back to ask about her inspiration and her design process. At the I-N-T-E-R-N-A-T-I-O-N-A-L show you’d think they would have realized that she does not speak English! No, no – the host just decided to speak slower. Whhhaaat iissss yoouurrrrrr iiiinnssspppiiirraaaattttttiiioooonnnn? #shamefaced A very sweet young lady went on the stage to serve as a French interpreter and that just saved the whole travesty.

Post intermission, there was yet again another real foreign designer followed by two other eye sores. I don’t personally like to wear alpaca wool, but I could see why the Peruvian Varignia Garcia featured it in her fall/winter collection.  So, before I even get into the clothes, let’s just discuss how the lovely folks at D.C. Fashion week spelled the poor girl’s name wrong all up and through the show.

Garcia’s designs were bohemian and warm. I could have done without the matching purses, but she produced a line with an identity and I can roll with the Peruvian punches. You know that I love a good warm scarf and I could imagine curling up with one and a tall glass of pisco! She was dishing the goods in the outerwear department. I don’t remember the sequence exactly, but I believe she was followed by a Nigerian designer and Rikaoto. I dont know… why waste time or energy on things that don’t matter?

I could talk about the two sisters who sang an Adele medley duet, but just quit in the middle with no coordination. One of the girls was on the Voice last season, she said. In fact, they were both pretty girls with nice voices and cute shapes, but limited lung capacity to actually carry any Adele song. They will be brilliant models or rocket scientists one day – or whatever they aspire to be – after they stop singing at fashion shows in D.C.

My last and final critique rests with the fact that the host transformed into a designer and released his line, Corjor International – apparently an odd acronym combining the first letters of his three sons’ names. (There was nothing international here, by the way.) All I know is that I saw a lot of men walking around in their underwear. This girl hasn’t seen her man in almost six months, so part of me was happy – very, very happy. The other part was confused – very, very confused. Since when are sheer pants on a man a wearable piece? Third problem identified. Oh, there clearly were no buyers present. 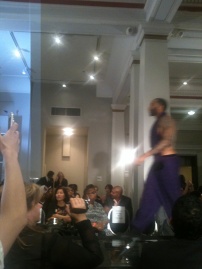 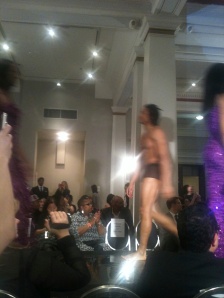 This dude used his paternity to create an underwear line called “Magnum.” Sigh. The rest of the men’s wear was clearly a mix of original pieces with others made by established designers. It remains unclear what was designed and what was store bought. Yet, another design faux pas brought to the fore. But, the women’s line showed some potential with interestingly light fabrics on non-traditional sized models.

All in all, my companion and I decided that the next time we’re heading to a fashion week event in America it’s New York City or bust! I really wish the Fashion Queens had a chance to see D.C.’s efforts and rule it ratchet. But, in their absence, I take it upon myself to declare that this was one of the most hilarious nights out I’ve had in a long time. I’m sad to say it was at a lot of other people’s expense, but such is life. If it doesn’t involve Capitol File, the Corcoran, the Lisner, the Smithsonian, or some element of the U.S. government…. you won’t catch me at anybody’s fashion event in D.C. ever again. Problems solved.